What Does Qurbani Teach Us As A Muslim? 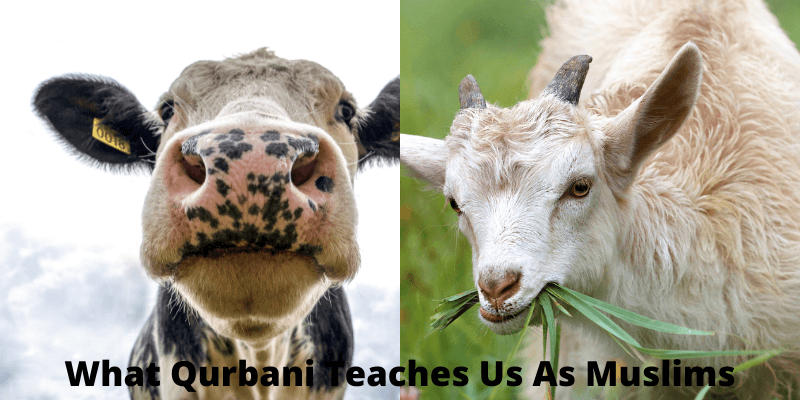 Allah (SWT) gave a crystal clear command of fulfilling Udhiya or Qurbani in the Quran. A verse of Surah-Al-Kauthar states:

‘‘Therefore turn in prayer to your Lord and sacrifice (to Him only).’’ (Al-Kauther: 2)

Qurbani in Islam also referred to as Udhiya is one of the most admired and highly essential practices of Islam. Muslims all around the world sacrifice an animal after saying Eid-Ul-Adha prayers in order to remember the sacrifice and sunnah of Hazrat Abraham. Eid-Ul-Adha is a very jolly occasion and Muslims all around the world celebrate it in good spirits.

In this article, we have put together a few benefits along with lessons that Qurbani in Islam provides us with.

Distributing in between the Neighbour and the Needy

Allah (SWT) has made a very comprehensible way of distributing the meat of Qurbani in Islam. After the sacrifice of an animal, its meat is split into three shares: One share is for the family, one is for the poor, and one is for the neighbour. In this way, Qurbani in Islam gives us a very essential message of looking after our neighbours along with stressing the rights of people who reside in our neigbourhood. As Muslims, it is our utmost responsibility to make sure that our neighbours are well fed and in good health. A hadith states that:

In a similar context, Qurbani is Islam reminds us about our duty regarding the rights of the poor. It has been made quite clear that people who are financially deprived and can not carry on with their lives due to a shortage of resources deserve an equal share of the meat of sacrificed animals.

These people can not even think of consuming meat all around the year, while on Eid-Ul-Adha they receive an abundance of meat and for once they along with their families can enjoy consuming meat. No doubt, there is a pearl of infinite wisdom in every rule set forth by Allah (SWT). Qurbani is just another way of providing food to people in need.

The food drive and food distribution by Ekplatebiryani have been providing billions of people around the world with a basic necessity that is food.

The Qurbani in Islam is fundamentally a re-enactment of the well-known historical event involving Prophet Abraham and his son Prophet Ismail. That is why every year on Eid-UL-Adha, Muslims all around the world take part in Qurbani. Usually, people buy animals 1-2 weeks before the sacrifice and they take care of those animals.

However, they let go of their sadness and still sacrifice their beloved animals as per Allah’s (SWT) will. This is what Qurbani in Islam essentially teaches us; Obedience and prioritizing Allah’s (SWT) command over everything.

Unity Among Muslims From All Around The World

Just like Eid-Ul-Fitr, Eid-Ul-Adha is a great event for forgetting old grudges and coming together. Moreover, it serves as an occasion that can strengthen family ties by celebrating it together. Muslims all around the world unite as one Ummah on the face of the world on this day in order to perform the ritual of Qurbani in Islam. Lastly, Eid-Ul-Adha brings together all the Muslim communities and strengthens their ties.

As Eid-Ul-Adha is nearing Muslims all around the world are preparing for Qurbani and Ekplatebiryani would like to extend a very joyous Eid Mubarak to you all.

History Of The Qurbani In Islam

Next, we know is, as soon as Prophet Abraham prepared to sacrifice his beloved son Prophet Ismail, Allah (SWT) replaced him with a lamb leaving Prophet Ismail sound and safe. Now, what lesson do we get from this incident?

The fundamental lesson for us behind this historical incident is that it is our utmost duty as Muslims to put the will of Allah (SWT) above every single thing. Just like Prophet Abraham was ready to sacrifice his dearest son Prophet Ismail without even flinching just because Allah (SWT) ordered. This teaches us, no matter how much we love something or someone, if it is against Allah’s (SWT) will it is in the best of interest for us to let go of it.

Is Qurbani mandatory in Islam?

Yes, Qurbani in Islam has been made compulsory for every Muslim individual who has reached the age of puberty and can afford it easily.

What is the reward for Qurbani?

Prophet Muhammad (PBUH) once declared regarding Qurbani in Islam ‘’It is the Sunnah of your father Ibrahim (as). For every hair of the Qurbani, you receive a reward from Allah (SWT)”. Now, imagine how much hair is present on the body of a goat, cow, or any other Qurbani animal. The billions of hair are the equivalent of the reward you will receive for Qurbani in Islam.

Why do Muslims practice Qurbani?

Qurbani stands for sacrifice. Every year on the tenth of Islamic month Dhul-Hijjah billions of Muslims around the world slaughter an animal in remembrance of the act of Prophet Abraham. Qurbani in Islam is practiced to reflect upon the fact how Prophet Abraham was prepared to sacrifice his dearest son Prophet Ismail just for the sake of Allah’s (SWT) will.

What Allah say about Qurbani?

Following are the verses related to Qurbani in Quran that Allah (SWT) stated:

‘’And recite to them the story of Adam\’s two sons, in truth, when they both offered a sacrifice [to Allah ], and it was accepted from one of them but was not accepted from the other’’

Now as you are aware of the essence of Qurbani in Islam, may Allah (SWT) enable us to perform Qurbani or Udhiya in true spirits with pure intention this Eid-Ul-Adha. In addition to that, may Allah (SWT) accept the pilgrimage of billions of Muslims from all around the world who will be performing Hajj this year.

Lastly, let us pledge that this year we will ensure that the share of the poor reaches them from our Qurbani meat. For this purpose, join hands with Ekplatebiryani and fulfill your duty of helping the poor!